Short talk about NBD from the KVM Forum 2019

Here’s our short talk about Network Block Device (NBD) given at the KVM Forum last month:

I’ve submitted a talk about nbdkit, our flexible pluggable NBD server, to FOSDEM next February. This is going to be about using NBD as a better way to do loop mounts in Linux.

In preparation I gave a very early version of the talk to a small Red Hat audience.

Sorry about the slow start. You may want to skip to 2 mins to get past the intro.

Summary of what’s in the talk:

It looks like I might be doing a short talk at the CentOS Dojo and Barbecue at Aldershot, UK, Friday 12th July 2013.

It’ll probably be about scripting/programming libvirt and the virt tools, but mainly it’ll be a chance for Q&A about any virtualization topic in RHEL / CentOS.

Also they have a BBQ — with beer! Sadly since I’m driving there I won’t be able to drink any of the beer. 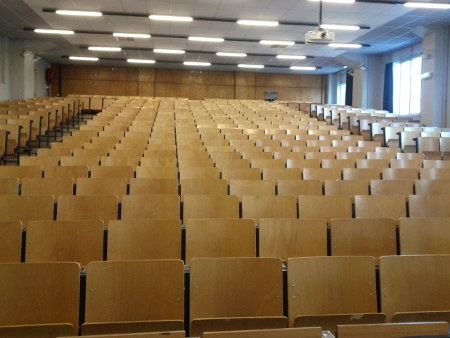 The code examples are in this git repository (git clone git://git.annexia.org/git/libguestfs-talks.git)

Thanks to everyone who came to our Summit talk this year. We must have had over 200 people there.

There will be a video — it’s not up yet.

In the meantime, here are the hand-outs which contain background, documentation and worked examples. Both are PDFs:

Back in 2008 we faced a pressing problem with virtualization. How do we look at what’s going on inside a virtual machine?

Let’s step back: what is a virtual machine? In nuts and bolts terms, it’s a big file or partition containing a disk image, and when it’s running, it’s a complicated emulation of CPUs, memory, and virtual devices like network cards. It’s interesting and necessary to be able to look inside all of those things. (“How many packets are coming out of the virtual network card?” “How is the virtual CPU coping with the load?”). But for the purpose of this talk I’m just going to talk about looking inside that disk image. 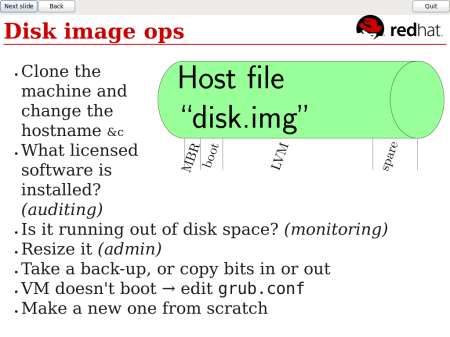 That large (multi-gigabyte) disk image file has a rich internal structure: a Master Boot Record; a boot partition; LVM, which has its own internal structures. Then it contains filesystems and those contain directories and files and more besides.

What might we want to do with the disk image if we could look inside it at this rich internal structure? Clone the machine, changing a few config files like the hostname. Edit grub.conf in a VM which isn’t booting. Audit a VM to find out what licensed software is installed. Is the VM running out of disk space? Offline resizing or backups. Make a new virtual machine from scratch … 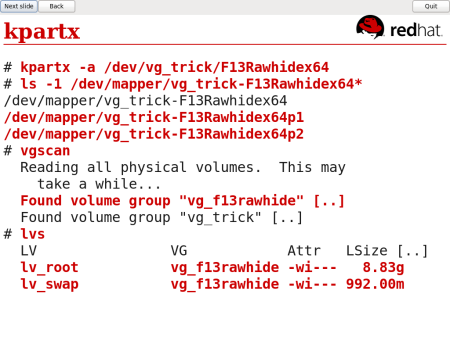 In 2008 (and now) you could look inside the disk image. First of all you’d need to be root. Then you could run a command line tool called kpartx which splits the disk image partitions into device mapper devices (this is why you need to be root). These are actually global devices on your host, visible to everyone. If you’re lucky, LVM on the host might find the volume groups located in the disk image, but you might have to adjust the global host LVM configuration to get that to work. If you’re unlucky, those could conflict with volume groups already in your host.

So if you are root, you should usually be able to mount a guest disk in the host. If your program crashes, of course, it will leave unattached device mapper devices, loopback devices and mount points on the host system.

It’s not clear from a security point of view if mounting untrusted guest devices on the host as root is a good idea.

That said, kpartx is a useful tool if: you are already root on the host, you just want to mount a partition, it’s ad hoc (no scripting), you can clean up if you make a mistake, and if you can trust the guests.

So we considered how we could improve this process and provide more features.

What is libguestfs? An API for creating, accessing, manipulating and modifying filesystems and disk images. Access from many different programming languages, or the command line. A set of useful tools. And applications built on top.

Today is going to be mainly a demonstration of what can be done with libguestfs and the tools we’ve built around this.

“Guestfish” is the “guest filesystem interactive shell”, and you can just run it on any disk image you happen to find. You don’t need to be root, unless you need root to access that particular image. In this case, the image is just a local file so I don’t need root.

You can see this image is a Linux virtual machine of some sort.

We can use the “cat” command to look for some identification:

We can also edit files. For example, we can edit the /etc/issue file to change the console login message:

Guestfish is the shell-scripting interface to the libguestfs API. It exposes the entire API, and as you can see that’s quite large:

(The full list of commands is here in the manpage).

Since the API is quite daunting, we do offer an overview of the whole API in the man page. So I won’t go through that here.

[Demonstration of using the API from Perl and Python]

This is the Perl example. Notice the use of the Augeas configuration API to pull out the list of NTP servers:

This was the Python example:

[Demonstration of guestfish on a Fedora live CD]

We show unpacking a Fedora live CD, as shown before on this blog.

You can see examples of virt-df output similar to what was demonstrated in the talk.

We demonstrated virt-inspector. You can see earlier examples from this blog here and here.

You can see examples of using virt-win-reg on this blog. The infamous Windows Registry sucks posting.

On this blog, FUSE support for libguestfs and some screenshots showing a Debian guest being mounted on the host.

An example of using hivexsh can be found earlier on this blog. 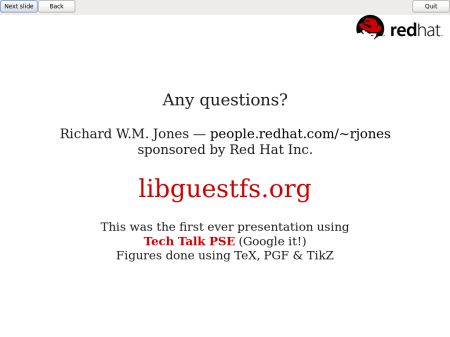 I’m giving a talk at Westminster University, London about libguestfs, guestfish and all the other tools we have been writing.

A talk and interactive session, Using the Windows cross-compiler:

If you have root access to a Fedora 10 or rawhide install (i386 or x86-64 only) you can follow along with the practical part.