Hardly need to say much more than what is said already in the news item.

Edit the Windows Registry in your VMs from the host

Update: Want to test this out? There are packages for RHEL / CentOS 5 here.

For a while we have shipped a tool virt-win-reg which lets you read keys out from the Registry. The top feature people have asked for is the ability to make changes in the Registry, and we have now implemented this (tracking bug 575738).

With the virtual machine shutdown (live merges are not supported), you prepare a text file describing the changes in “.REG” format. For example:

and simply merge that into the Registry:

After booting Windows, we can see the new subkey has appeared: 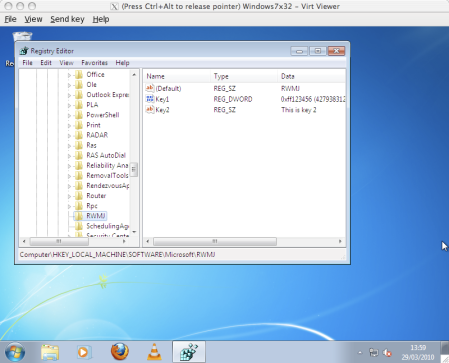 (which means “delete Key1”). I have to shut down Windows, run the same virt-win-reg command, and start Windows again.

At this point Windows decides to punish me by demanding “activation” (I believe this event is entirely separate from the Registry change). Red Hat pays lots of money each year to Microsoft for genuine MSDN licenses so we can do this sort of interop testing, to improve the utility of Windows, and this Windows installation is fully licensed. Nevertheless, there is a bug in this version of Windows which means it can never be activated because activation runs before the network setup. So I’m punished with a black desktop and a stern warning. This makes me hate Windows just a little bit more than before …

Anyway, the key has been removed: 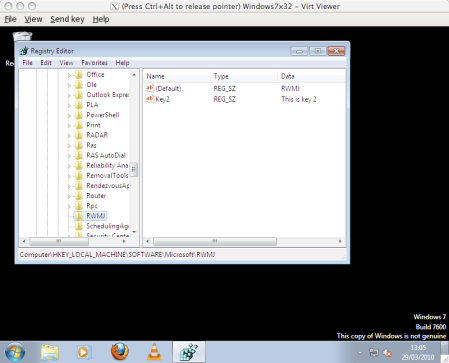 Finally I put this into an updates file:

And after shutting down Windows, running virt-win-reg and rebooting Windows, we see that the Registry key has been removed entirely: 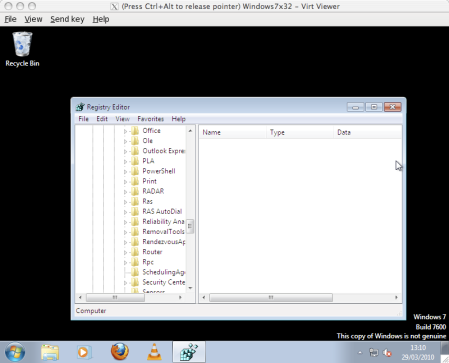 BBC breaks get_iplayer, and a fix

I suggest you read this muddle-headed blog post, and then the comments after it.

Anyway, Phil Lewis has unfortunately pulled get_iplayer. Luckily get_iplayer lives on in this git repository. You will need the following very small patch to make it work:

From the spam folder of this blog today:

The layout for %BLOGURL% is a bit off in iCab. However I like your site. I may have to install a “normal” browser just to enjoy it.

I usually don’t usually post on many Blogs, yet I just has to say thank you for %BLOGTITLE%… keep up the amazing work. Ok regrettably its time to get to school.

Even more incompetently, neither of the spammy URLs they were trying to add actually worked (checked using ‘wget’, not a real browser of course). 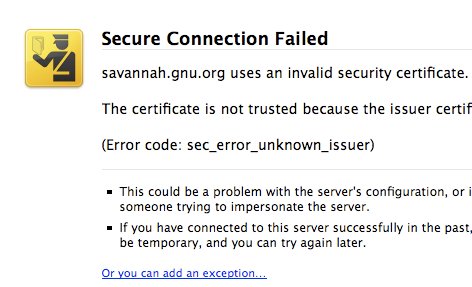 A lot has been written about how Firefox’s stupid dialog is a big step backwards for the web.

But is there a way to disable it? Ideally I’d like it to work like ssh – give me a simple single-click warning and display the certificate the first time, and after that don’t say anything at all unless the certificate changes unexpectedly.

This paper on phishing [PDF] is excellent.