This seems to be completely undocumented which is why I’m writing this … It is possible to boot a Linux guest (Fedora in this case) from a live CD on a website without downloading it. I’m using our favourite flexible NBD server, nbdkit and virt-install.

First of all we’ll run nbdkit and attach it to the Fedora 29 live workstation ISO. To make this work more efficiently I’m going to place a couple of filters on top — one is the readahead (prefetch) filter recently added to nbdkit 1.12, and the other is the cache filter. In combination these filters should reduce the load on the website and improve local performance.

I actually replaced that URL with a UK-based mirror to make the process a little faster.

After a bit of grinding that should boot into Fedora 29, and you never (not explicitly at least) had to download the ISO. 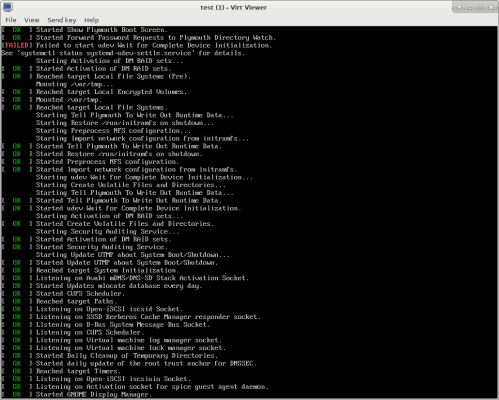 To be fair qemu does also have a curl driver which virt-install could use, but nbdkit is better with the filters and plugins system giving you ultimate flexibility — check out my video about it.

nbdkit is our flexible, plug-in based Network Block Device server.

While I was visiting the KVM Forum last week, one of the most respected members of the QEMU development team mentioned to me that he wanted to think about deprecating QEMU’s VVFAT driver. This QEMU driver is a bit of an oddity — it lets you point QEMU to a directory of files, and inside the guest it will see a virtual floppy containing those files:

That’s not the odd thing. The odd thing is that it also lets you make the drive writable, and the VVFAT driver then turns those writes back into modifications to the host filesystem (remember that these are writes happening to raw FAT32 data structures, the driver has to infer from just seeing the writes what is happening at the filesystem level). Which is both amazing and crazy (and also buggy).

Anyway I have implemented the read-only part of this in nbdkit. I didn’t implement the write stuff because that’s very ambitious, although if you were going to implement that, doing it in nbdkit would be better than qemu since the only thing that can crash is nbdkit, not the whole hypervisor.

This gives you an NBD source which you can connect straight to a qemu virtual machine:

Previously … create ISO images on the fly in nbdkit

Supernested on the QEMU Advent Calendar 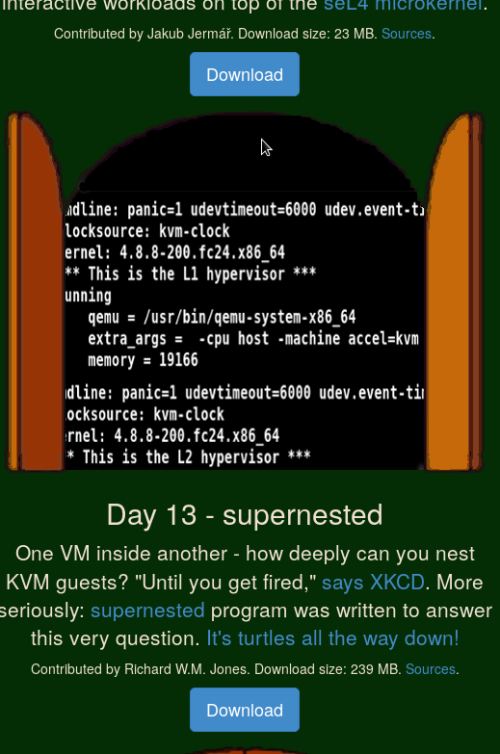 I wrote supernested a few years ago to see if I could break nested KVM. It works by repeatedly nesting KVM guests until either something breaks or the whole thing grinds to a halt. Even on my very fastest machine I can only get to an L4 guest (L0 = host, L1 = normal guest).

Please note that supernested should only be run on idle machines which aren’t doing anything else, and it can crash the machine.

Red Hat provide RHEL KVM guest and cloud images. At time of writing, the last one was built in Feb 2015, and so undoubtedly contains packages which are out of date or insecure.

You can use virt-customize to update the packages in the cloud image. This requires the libguestfs subscription-manager feature which will only be available in RHEL 7.3, but see here for RHEL 7.3 preview packages. Alternatively you can use Fedora ≥ 22.

All KVM Forum talks can be found here.

Assuming HMG can get my passport back to me in time, I am speaking at the KVM Forum 2015 in Seattle USA (full schedule of talks here).

I’m going to be talking about virt-v2v and new features of qemu/KVM that made it possible for virt-v2v to be faster and more reliable than ever.

My question is: How deeply can you nest KVM?

This is not so easy to test at the moment, so I’ve created a small project / disk image which when booted on KVM will launch a nested guest, which launches a nested guest, and so on until (usually) the host crashes, or you run out of memory, or your patience is exhausted by the poor performance of nested KVM.

The answer, by the way, is just 3 levels [on AMD hardware], which is rather disappointing. Hopefully this will encourage the developers to take a closer look at the bugs in nested virt.

How does this work?

Building a simple appliance is easy. I’m using supermin to do that.

The way it works is inside the Lx hypervisor it runs the L(x+1) qemu on /dev/sda, with a protective overlay stored in memory so we don’t disrupt the Lx hypervisor. Since /dev/sda literally is the appliance disk image, this all kinda works.

Notes on getting VMware ESXi to run under KVM

This is mostly adapted from this long thread on the VMware community site.

I got VMware ESXi 5.5.0 running on upstream KVM today.

First I had to disable the “VMware backdoor”. When VMware runs, it detects that qemu underneath is emulating this port and tries to use it to query the machine (instead of using CPUID and so on). Unfortunately qemu’s emulation of the VMware backdoor is very half-assed. There’s no way to disable it except to patch qemu:

It would be nice if this was configurable in qemu. This is now being fixed upstream.

Secondly I had to turn off MSR emulation. This is, unfortunately, a machine-wide setting:

Thirdly I had to give the ESXi virtual machine an IDE disk and an e1000 vmxnet3 network card. Note also that ESXi requires ≥ 2 vCPUs and at least 2 GB of RAM. 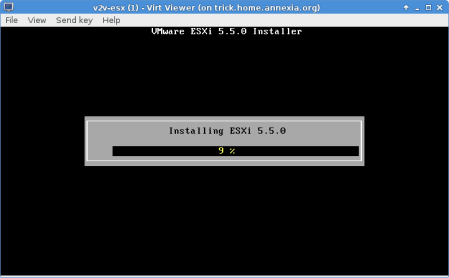 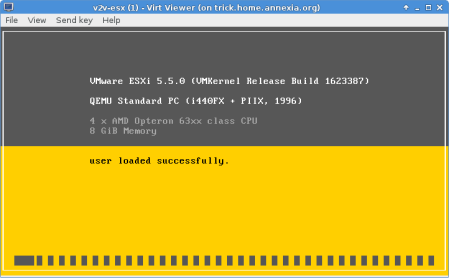 KVM working on the Cubietruck 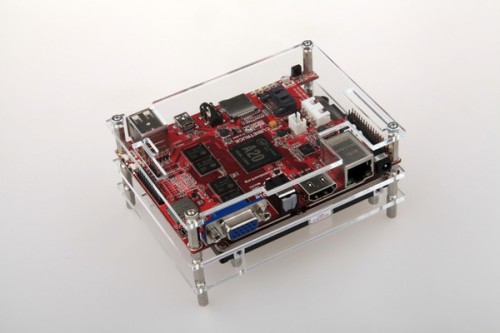 I managed to get KVM working on the Cubietruck last week. It’s not exactly simple, but this post describes in overview how to do it.

(1) You will need a Cubietruck, a CP2102 serial cable, a micro SDHC card, a card reader for your host computer, and a network patch cable (the board supports wifi but it doesn’t work with the newer kernel we’ll be using). Optional: 2.5″ SATA HDD or SSD.

(2) Start with Hans De Goede’s AllWinner remix of Fedora 19, and get that working. It’s important to read his README file carefully.

(3) Build this upstream kernel with this configuration:

In menuconfig, enable Large Page Address Extension (LPAE), and then enable KVM in the Virtualization menu.

Reboot again, use the commands above to boot into the upstream kernel, and if everything worked you should see:

Edit: dgilmore tells me this is no longer necessary. Instead make sure you use the qemu -cpu host option.

Then you should be able to create VMs using libvirt. Note if using libguestfs you will need to use the direct backend (LIBGUESTFS_BACKEND=direct) because of this libvirt bug.

There are lots of cloud disk images floating around. They are designed to run in clouds where there is a boot-time network service called cloud-init available that provides initial configuration. If that’s not present, or you’re just trying to boot these images in KVM/libvirt directly without any cloud, then things can go wrong.

Luckily it’s fairly easy to create a config disk (aka “seed disk”) which you attach to the guest and then let cloud-init in the guest get its configuration from there. No cloud, or even network, required.

I’m going to use a tool called virt-make-fs to make the config disk, as it’s easy to use and doesn’t require root. There are other tools around, eg. make-seed-disk which do a similar job. (NB: You might hit this bug in virt-make-fs, which should be fixed in the latest version).

I’m also using a cloud image downloaded from the Fedora project, but any cloud image should work.

user-data contains other custom configuration (note #cloud-config is
not a comment, it’s a directive to tell cloud-init the format of the file):

I put these two files into a directory, and run virt-make-fs to create the config disk:

Now I need to pass some kernel options when booting the Fedora cloud image, and the only way to do that is if I boot from an external kernel & initrd. This is not as complicated as it sounds, and virt-builder has an option to get the kernel and initrd that I’m going to need:

Finally I’m going to boot the guest using KVM (you could also use libvirt with a little extra effort):

You’ll be able to log in either as fedora/123456 or rjones (no password), and you should see that the hostname has been set to cloudy.